Over Forty? Let's do this!

Discussion of dating, relationships and the single life with people 40+. Please be civil.
[link] 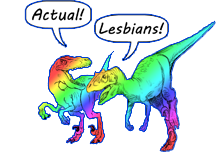 A place for discussions for and by cis and trans lesbians, bisexual girls, chicks who like chicks, bi-curious folks, dykes, butches, femmes, girls who kiss girls, birls, bois, aces, LGBT allies, and anyone else interested! Our subreddit is named actuallesbians because lesbians is not really for or by lesbians--it was meant to be a joke. We're not a militant or exclusive group, so feel free to join up!
[link]

The grand opening is planned for soon. He's filled up most of his exhibits, but he's still looking for a final touch to the Q room. He puts up an online ad campaign and waits to hear back, delaying the opening until he can find a good Q. After about a month, he's about to give up and close down the museum for good, when he receives a letter.
"Dear sir,
I've discovered your advertisements and learned about your museum. I'm ecstatic to discover a fellow giant alphabet enthusiast! I, too, quested for a good Q. Fortunately, I have been successful enough to come to have 2 Qs: one is a large, mahogany carving, which I'm willing to part with for $1,500. The other is a marble statue dating back 150 years, which I will sell you for $10,000. I eagerly await your response,
Rodney Joseph King."
The man wrote Mr. King back, and they arranged for the delivery of the wooden Q to the museum. Once the delivery arrived, however, it contained a metal post in the shape of an E. Confused, he wrote to King, explaining that he had received the wrong item. The letter he got back read:
"My apologies. I am having the Q carving sent at once. As a token of good will, you may keep the E for no extra charge.
Rod J. King"
The very next day, another delivery arrived. Relieved, the man went to unload his new Q so he could finally open his museum. However, he was shocked to find a wooden post in the shape of an E had been sent instead. Suspicious, he wrote another letter to King, demanding either the Q or his money back. Soon, a letter arrived in the mail:
"Again, my deepest apologies. Once again, you may keep the E. I would send you the Q carving, but it's recently been stolen from me. I have enclosed a check for $1,500, your payment for the Q. I am also willing to sell you the marble Q statue at a discounted price for your troubles - only $7,500.
R. J. King"
Despite his issues, this was the man's only potential supplier of a Q so far, so he decided to order the Q statue. Sure enough, the delivery came soon. The man went to inspect it, and upon seeing the contents, he yelled out,
"Dammit! It's another E-post from R. Joe K's!"